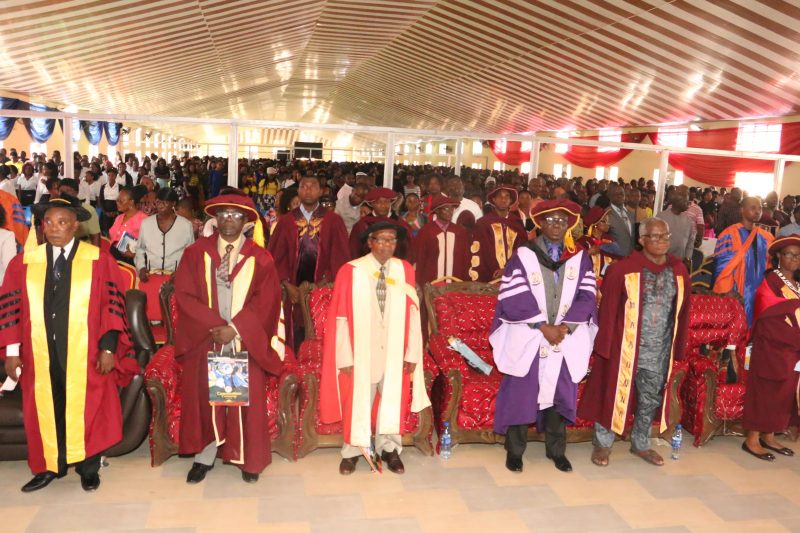 CONVOCATION ADDRESS BY THE FOUNDER AND CHANCELLOR OF MADONNA UNIVERSITY

VERY REV.FR PROF. E.M.P. EDEN, C.S.SP., O.F.R., ON THE OCCASION OF THE SPECIAL CELEBRATION OF THE 16TH CONVOCATION CEREMONY AND 20TH ANNIVERSARY OF MADONNA UNIVERSITY HELD ON SATURDAY, 10 AUGUST 2019.

By 1986 a lot of parents were complaining bitterly about the falling standard of education in the country which came following the “School Take-Over” by the government. Not only the parents, but also the generality of the public were yearning to invite individuals and groups to lend a helping hand.

Following this I took the lead in establishing the first private Secondary School that is, Our Saviour Girls Secondary School Aba, Abia State whose student came first in an international Science competition organized in Brazil from 27th October to 2nd November 2009.

From this time, I struggled until i established the first private tertiary
institution in the country – Our Saviour Institute of Science, Agriculture and
Technology (OSISATECH), Enugu in October 1989.

THE STRUGGLE FOR. THE ESTABLISHMENT OF MADONNA UNIVERSITY

The birth of OSISATECH (Polytechnic and College of Education) came as an eye opener and welcome relief to parents.

By 1994 a retroactive Federal law stated that only the Federal Government could charter private Universities. This made the situation very difficult for the already existing Madonna University. One had to go back to the drawing board and start all over again what had been virtually completed. Yet I was not discouraged. Dogged in my resolve, I set out and struggled
indefatigably to meet all the stringent conditions laid down for the Federal charter of Madonna University. As I approached many people in the government circle and tried to explain to them the necessity of allowing private universities as a remedy against the drastically falling standard of education, most of them seemed not to understand me. Hence, I resolved to see the Head of State, His Excellency, General Ibrahim Badamasi Babangida (GCFR).

To my greatest happiness when I went into his house (in the Presidential Villa) in Abuja he personally received me very well and listened to me as a “man of God”. With my detailed explanations to him of the role of private Universities in the proper education system of all well advanced nations, His Excellency quickly saw private education as very necessary to arrest the fast-growing decay in the education system of any nation. He took action immediately and instructed the then attorney general Justice Clement Akpamgbo to draw the enabling law (edict) permitting the establishment of private universities in the country. Thus it became possible
for Madonna University and subsequent private universities. to be established with the Federal Government law.

THE BIRTH OF MADONNA UNIVERSITY

WHAT IS MADONNA UNIVERSITY

Madonna University is a unique institution operating and efficiently running three (3) active campuses across three states of the federation. Enjoying both stately and Ecclesiastical approval, it strives to revive in her community the age-long tradition of Catholic Education and the exacting demand of our contemporary society for sounded & in healthy life -promoting morality.

Madonna University, has. about, the best state of the art facilities among the committee of Universities: in Nigeria.  Notwithstanding the cost of establishing and maintaining these facilities, the University because it cares for the less. privilege and poor charges the lowest tuition and other fees obtainable in any private university in Nigeria. It has a policy of awarding scholarships to deserving and qualified infrastructure under privileged students, thereby providing opportunities for University education for them. Madonna remains today among the best Universities in Africa in terms of quality. of students, staff, Madonna University Operates students work-study programme; a programme that helps Students to earn some money by offering some services to the University during their free period which is geared towards supporting our students financially.

Our 100% boarding system in the University campus enhances effective monitoring, guidance and counseling. It thus enables the management to know the students better for more appropriate guidance. Madonna is a- university where there is no secret cultism, molestation, strike and exam
malpractice, no bullying of new students by old ones or the weak by the strong.

Madonna University has upgraded its ICT center to world class facilities
across its three (3) campuses which enables both students and parents to
key into it for free internet access for their research work, University Portal
where parents can access the results of their children and other services.

It is on record that Madonna University is about the only university in Nigeria that partners with students through the establishment & comprehensive involvement of their students in numerous Entrepreneurial projects. This includes the setting up of some pilot plants such as beverages
processing plants, pharmaceutical plants, table water processing plants, bakery, paints and tissue processing plants etc. All these are managed and run in conjunction with our students as part of their skill acquisitions programs. Our FM Radio Station and Music production unit are made
available to our students as part of their practical training. Little wonder, our students graduate with honors in character, leadership, skills and academics. This explains why Madonna graduates do not look for job but job looks for them.

Madonna University has international partnership with over seven (7) foreign universities from five (5) continents of the world namely:

This partnership has significantly impacted positively on the stage of world scholarship. The numerous expatriates involved in the collaborations have positioned Madonna University as the most international University in Africa as well as a university with the highest research impact in Nigeria.

The mission of Madonna University is to engender internal peace and happiness which can only be achieved through authentic and holistic education. Hence Madonna pays equal attention to academics and morals. With its motto as “Decency in Education and Morals” it is not a
university that produces educated criminals or learned rogues. It is not under the coverage of the association of NANS or Students UNIONISM. Out of about 1,600 recognized Catholic Universities registered in Paris under International Federation of Catholic Universities (IFCU)
Madonna University stands out in category “C” as among the best of the Catholic Universities in the whole world.

Ladies and gentlemen, permit me to state here clearly that it is on the above basis that certificate from Madonna University is recognized and acceptable all over the world both for employment and those seeking to further their education.

I hereby use this opportunity to recognize the creative and dynamic leadership style of the NUC Executive Secretary, Prof. Abubakar Adamu Rasheed, MFR, which has within ….

In conclusion, I commend all our students for their display of great maturity and the staff for the remarkable display of patriotism and loyalty.

Thanks, and God bless you all.