His Life and Works at a Glance

He was born on May 20, 1947, at Nkanu West, Enugu State, Nigeria. There was something extraordinary about the preceding night especially with the appearance of a glow of light flashing across the sky (a comet). The elders believed it is a sign heralding the birth of a great man or the death of a great man. This is akin to the event of Jesus’ nativity when the Magi were led to the newborn child by a star. The next day (20th May 1947), Omeogo went into labour while processing palm nuts, and without prolonged labour, gave birth to a baby boy to the delight of all and sundry. They were still rejoicing when darkness suddenly descended on earth in the middle of the day – in a total eclipse of the sun. There were utter perplexity and confusion all over. The people were relieved after the eclipse and all believed that even the sun bowed in reverence to the child with a golden heart. The child was a real comfort especially to the mother who has suffered the pain of losing her previous children to the cold hands of death.

He grew up under a charitable and peace-loving mother, Mama Omeogo.  Studied in America and majored in Philosophy with his PhD in Metaphysics (1984).

SOME OF THE HIGHLIGHTS

The Madonna International Charity Peace Award (MICPA) was founded by Very Rev. Fr. Prof Emmanuel Edeh. The award institution was inaugurated on 19th November 2006 during Madonna International Convention held in Madonna University Elele Campus. The inauguration of this institution is one of unflinching efforts to encourage the perpetuation of Mama Omeogo charity through a practical and effective charity which have brought peace to millions of suffering people of God all over the world. So, the inauguration of MICPA has a motivational undertone for the charitable people not to relent but to do more. The Peace Award International Institution has a decision making body with Rev. Fr. Prof Edeh as the head. They decide and nominate awardees and their terms of reference among other things include:

It took the decision making body three good years of brain-storming to come up with effective, efficient and well-articulated criteria for the award presentation. The presentation of the first formal charity peace award was done on 9th January 2009 at Elele Campus of Madonna University during the first Theological Convention jointly organized in preparation for the second African Synod of Bishops. But one may wisely ask “how did it all start?” To attempt the question, let us look at the background of the Charity Peace Award.

AWARDS GIVEN SO FAR

Since its inception, Madonna International Charity Peace Award has been given out to the following deserving persons:

In order to avoid distractions from the real motives of his activities, Rev. Fr. Prof Emmanuel Edeh has always avoided attracting unnecessary attention. That is why he had abinitio shunned the idea of snapping pictures or media publication of his works. All he is doing is for the sake of peace to humanity and for the glory of God. Be that as it may, no one can ever cover the moonlight with his palms. People of the world are watching and making assessments of all the works and achievements of Rev. Fr. Prof Edeh and how they are meeting the felt needs of people.

Rev. Fr. Prof, Edeh allowed the publicity of his works, and achievements and also acceptance of awards and recognitions for the reason of encouraging other people in the society to emulate his examples. He has through his work of charity received local and international awards and recognitions, some of which involve the following:

His works and achievements are summarized

in his mission of practical and effective charity developed from his personal prayers for the transformation of the lives of the sick, the suffering, the handicapped, the abjectly poor, the abandoned and troubled youths of the society. The contributions which this mission has made to this effect cannot be over emphasized.

Numerous people who have in one way or the other encountered him through his mission of practical and effective charity confessed that he is peaceful, loving, compassionate, charitable, consistent and persistent, painstaking and intelligent, innovative, and also a disciplinarian.

He actually ramified into different socio-economic aspects of human endeavors during the practical implementations of his mission of effective charity. This effective charity is rooted in his African Philosophy that man is the greatest among God’s work of creation, because he is created in God’s image and likeness as a “good that is” or “mma-di”. His kind of charity work, exemplifies the practical manifestation of God’s care for humanity through man. He has through his charity works brought peace; healing and succor to the minds of people especially the sick, the poor and the suffering. He achieved all these through the Catholic Prayer Ministry of the Holy Spirit and its offshoot, the Pilgrimage Centre of Eucharistic Adoration and Special Marian Devotion, Elele. People from all over the world now swarm there to find solutions to their spiritual problems.

His conflict management strategy is practically wonderful. Through his Center for Peace, Justice and Reconciliation, peace has returned to the hearts of men and to society. Just as Plato and Aristotle articulated Western Philosophy through Greek Metaphysics, he articulated African philosophy through the articulation of Igbo metaphysics. The first of its kind in the history of thought. That is why he is popularly called the “Father of the African philosophy”. If “The world could practically implement the dictates of the African philosophy of being, the chances of engaging in wars with each other will be drastically reduced to the advantage of world peace.

He has also made tremendous achievements in the care for the poor through his Umuogbenye Center, Motherless Babies Home, a rehabilitation centre for the troubled youths, medical care for the aged Bishops and priests, scholarship to the handicapped and indigent students to mention but a few. 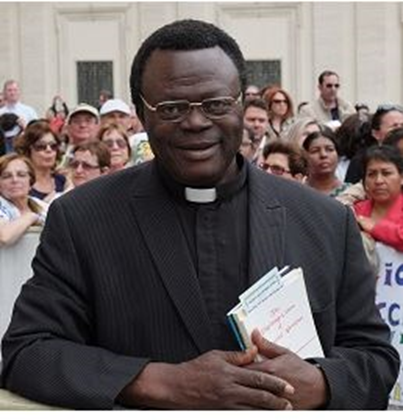